We have been adopted by two male pheasants, Pherdinand and Phred. This is somewhat of a mixed blessing. They have stunning colouring and are fun to watch strutting around the garden, but a menace when they get into the veggie beds and decimate the plants.

Before the boys took up residence, I thought that pheasants were the stupid. Their lack of road sense is legendary. They rush frantically in front of oncoming cars, then bob backwards and forwards trying to decide which way to run.

However Pherdinand is an altogether brighter bird. He & hubby share a passion for mizuna, which has led to an arms race in the garden. Hubby has been testing all manner of mizuna-defence-devices, and thought he’d won when he constructed a wire cage around his prized leaves. But … a few days later the leaves were in tatters. Pherdi had perched on top of the cage, depressed the wire till the mizuna poked through and proceeded to eat the leaves. We now have a bigger and better cage. For the time being, the mizuna appears to be safe, if somewhat difficult for us to harvest.

Hubby is quite besotted with the pheasants. He started throwing seeds out for them during the summer. As both parties developed confidence in the relationship, this progressed to hand-feeding. Pherdi, however is no longer happy to wait for his food. He now knocks on the back door when he decides it’s time for grub. He’s got hubby perfectly trained to feed him on demand, three times/day. He’s not so dumb, this pheasant of ours. 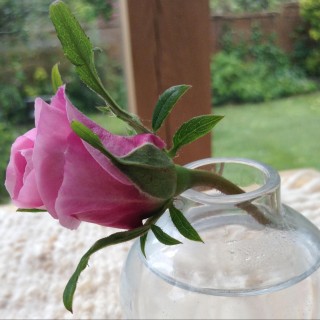